These Men Are Called Musicians (or, In the Steps of Slipknot): Des Moines, Iowa

Following Saturday's entertaining albeit exhausting matrimonial festivities, van*gloria headed due south to windblown, corn-intensive Urbandale, Iowa, where a tornado siren went off immediately as we arrived at my aunt's and uncle's house (who wants to take bets on whether or not a hurricane hits when we play our last show in Miami?). After a brief subterranean stay in the basement with my parents, grandparents, Aunt Jane, Uncle Paul, and cousins Amy, Jeff, and Dan, we got the "all clear" and spent the rest of the evening enjoying above-ground comforts: hamburgers, fresh fruit, Frito Lays, Coca-Cola Vanilla, sparkling conversation, and heated games of volleyball and badminton. 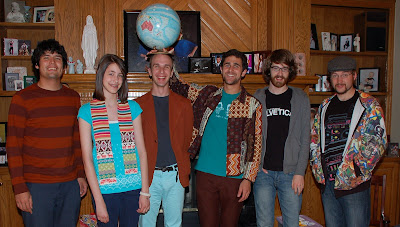 The next day we made a short journey to nearby Des Moines, Iowa's legislative center, where we enjoyed some delicious Thai soup, iced coffee, and curry at Ban Thai, in Des Moines' East Village, and then played an all-ages show at the House of Bricks. The all-ages aspect of the show proved to be significant because almost half of our audience consisted of my middle and high-school age cousins and their friends, who, after crowding in front of the stage and issuing frequent enthusiastic hoops and hollers during our entire set, were promptly kicked out by the bouncer at 9:10 pm sharp, right before our last song, presumably due to some municipal liquor ordinance. Of course, at the time we were unaware of said liquor ordinance - we just saw half our audience filing out as we announced our last song, "Slowly It Hits You." Initially I thought that maybe it was past everyone's bedtime, and Nick postulated that someone had glanced outside and spotted an ice cream truck. 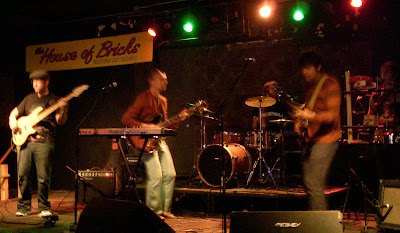 After the show, Eli and Zach from Viva Montesa, the super-swell Des Moines band who set the show up for us, invited us to GoodSons, the martini and panini bar (really!) where they worked in nearby Beaverdale. We hung out, visited their friend's tattoo and piercing parlor next door, and watched Andrew pretend to be chased by a treadmill-running exercizer in the 24-hour fitness center across the street (video footage coming soon). Eli and Zach were amazingly nice guys and great performers ("That singer is loose as a goose!" said my grandpa, referring to Eli's Iggy Pop-esque stage antics), so we're thrilled to be playing with them again at the Frequency in Madison, WI on June 16th.
Thanks again to my family in Des Moines (and my parents from Madison) for coming out and supporting us, and for keeping us well supplied with hamburgers, ice cream, and air mattresses. In closing, I'll wrap up this post with an old axiom that was displayed on a rather bizarre and eclectic slideshow that ran continuously on one of the House of Bricks' television screens: 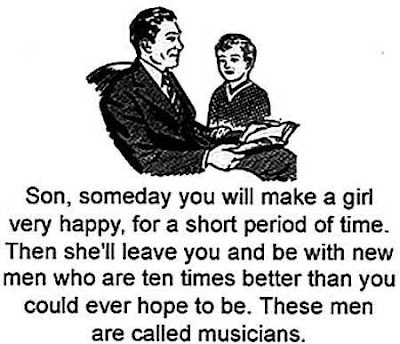 Of course, one school of thought would say: "These men are called attorneys or doctors or investment bankers or insurance claims adjusters or data entry specialists or pretty much any employees who earn an actual salary with health and dental benefits, and can afford a car without massive structural and transmission problems, and can rattle off at least six ways, off the top of their heads, to maximize the value of a 401(k) plan."
What do you think, girls?
Posted by Matt at 8:04 PM