Hey Kids! Welcome to a Magical World of Steel Bars and Dark Tunnels! 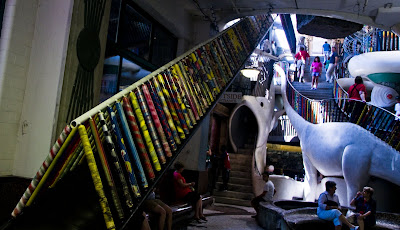 We arrived in St. Louis with plenty of time to hang out, and although we already had our sights set on visiting the famous, mega-futuristic arch, we had never heard about the very strange and wondrous City Museum (check out their photo gallery). 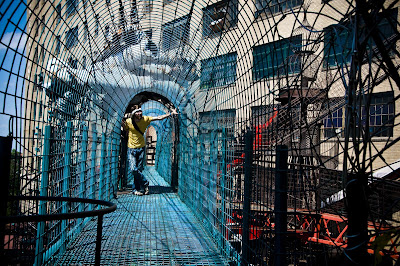 On a tip-off from Nick's friends Dan and Cody, we headed to downtown St. Louis and into a very bizarre building, less of a typical museum and more like some sort of amusement park spawned from the mind of Tim Burton. The City Museum was in fact the work of artist Bob Cassilly, a "classically trained sculptor and serial entrepreneur." 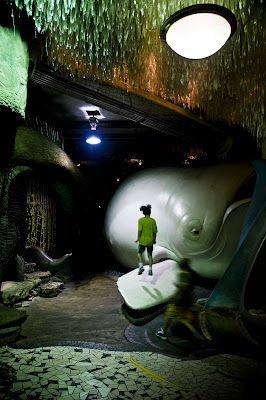 The Museum is housed in a large multi-storied warehouse, and contains many different sections and oddities: Gutted airplanes, a labyrinth of dark caves, a 10 story spiral slide, a schoolbus hanging over the edge of the building, tubes for crawling made from metal bars suspended high above the ground, aquariums, skate ramps, a fire truck, surrealist art, an old bank vault, a hall of kaleidoscopic mirrors, a self-playing Wurlitzer theater organ, a lot of stuff made from scrap metal, a ferris wheel, a giant praying mantis sculpture, and most importantly, endless secret pitch-black claustrophobia-inducing tunnels to lose your kids in and never see them again. 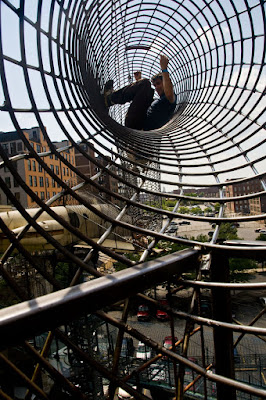 In fact, City Museum might be the most dangerous place to take your kids I've ever seen. There seems to be so many ways to get injured, stuck, lost or dead that it blows my mind. This is definitely the place where the kids with the "cool" parents hang out, where skinned knees are a given and the possibility of something much, much worse is easily imagined and probably within reach. However, City Museum isn't just for kids, and all five of us had a van*glorious time crawling into places we probably shouldn't and marveling at the incredible junkyard aesthetic that runs throughout the entire complex. 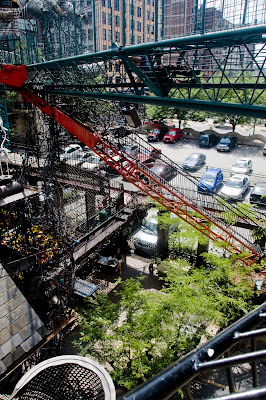 (ed. - as part of our Guest Writers in the Round literary series, the final paragraph of this post will be penned by noted postmodern theorist and potato chip packaging copywriting historian Matt Gajewski.)
After surviving the City Museum with all appendages, phalanges, and major organs intact, we ascended the St. Louis Arch in a space capsule-like elevator and took a quick five-minute aerial gander of the Gateway to the West before descending and hurrying to our gig, at Off Broadway. Off Broadway was a beautiful venue and the opening band, Gentleman Auction House, sounded intriguing during their soundcheck, but alas we could not stay for long after our set, as we had to ramble on to Carbondale, Illinois that very evening. Thanks to Nick K's friend Dan for coming to the show with his St. Louis pals and for tipping us off to the grandiloquence of the City Museum (and for also warning us to be extra careful not to seriously injure ourselves). As a final note, it is highly recommended that you put on the Steely Dan version of Duke Ellington's "East St. Louis Toodle-Oo" if you ever find yourself arriving in this fair city. We did, and it proved to be a suitable talisman ensuring playground-scampering fun rather than major physical debilitation and harm!
Posted by Benders Blues at 11:19 PM