Music City, What Do You Mean? - Nashville

In the Robert Altman film Nashville the central characters' arrival to the city is heralded by a massive slapstick-rich traffic jam near the international airport. On the Remember to Save All Gas and Vehicular Repair Receipts for Tax Purposes Tour 2k9, our arrival was heralded by a delicious, relaxing barbecue at the home of fellow Frost School of Music graduate Johnny Shortridge. We ate hamburgers and brats, played Head Honcho (the game taught to us by strangers in Madison, WI which involves the Head Honcho trying to make everyone else in a circle laugh, often resulting in long, awkward, uncomfortable silences) and met a girl who had finished second in the reality TV showIn Search of the Partridge Family (which involved acting and singing performances, not a race-against-time mission to find missing members of the Partridge Family before they succumbed to hypothermia and exposure in the arctic wilds of Alaska). Orange creme cake was also served. 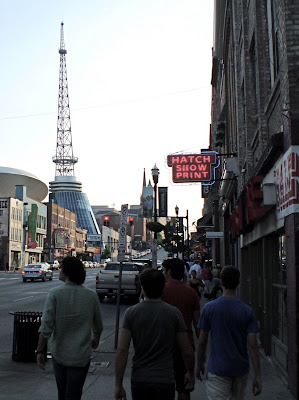 The next morning we attempted to eat lunch at the venerable Prince's Hot Chicken Shack (legend has it that their spicy fried chicken is the result of a girlfriend's personal vendetta against womanizing founder Thornton Prince: she sprinkled copious amounts of hot pepper onto his chicken in an act of revenge but he ended up loving it and told all his friends about the recipe), but it was closed on Mondays so we instead met up with old UM friend and Nashville native Laura Miller and headed to Mitchell's Delicatessen, where we enjoyed a decidedly less greasy and palette-burning meal than Prince's would have offered us. Luke and Paul then spent the afternoon music-making with Johnny while Nick, Andrew, and I visited Laura's house, where we admired her impressive fruit, vegetable, spice, and 14-karat gold wedding band (really!) yielding garden and watched the embarrassingly engrossing reality TV programTrading Spouses, in which a white and black family switch wives (sample dialogue of square, Bostonian, fabulously wealthy white husband: "So, um, do you like the hip hop and the rap music?"). Laura then dropped us off at the Green Hills Mall so Nick could visit the Apple store, and Andrew and I entertained ourselves by playing the game Bags, in which we tried to acquire one empty shopping bag from each store in the mall, adding one new bag each time we giddily traipsed past Nick in his Apple store line. Only United Colors of Benetton didn't give us a bag, thus becoming the game of Bag's sole loser. Bags concluded with Andrew and I returning all the bags to their appropriate stores - but not before an obligatory photo op. 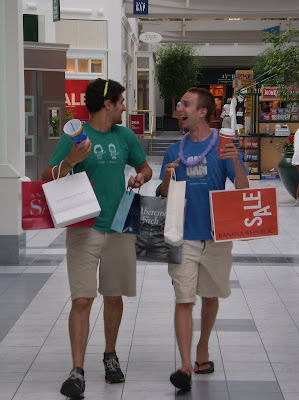 Fellow UM music school graduates Mick Utley and Jon Draper picked us up from the mall and drove us to downtown Nashville, where we stepped into Robert's Western World to watch the fantastic John England and the Western Swingers who charmed us with their impeccable musicianship and folksy aw-shucks stage banter ("Now you'll notice Pappy is more lively today than usual - that's because we gave him his muscle relaxants six hours before the gig instead of two! Hey! . . . Remember, we're playing for tips"). Then we loped next door to Jack's Bar-B-Que for some delicious brisket, bbq pork, etc. before taking a gander at Fort Nashborough, on the Cumberland River, which Laura Miller said would help us truly understand the frontier (and which, after once protecting the nascent settlement of Nashville from enemy forces, now proudly stands several hundred feet away from a drinking establishment where women dance on the bar). The night closed out with a trip to the Bluebird Cafe, a famous acoustic and country music venue, where we caught both the tail end of an open mic set and a jaw-dropping performance by the Mike Henderson Band. Mike Henderson, the overalls-clad singer and guitarist, dazzled us all with his pyrotechnic playing, and Grammy award-winning singer Delbert McClinton provided some guest vocals, but not before jokingly heckling the piano player: "Yeah, slap it around . . . now go tell your mama about it!" 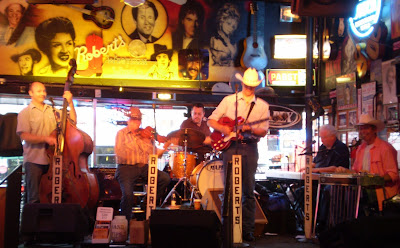 The following morning we made a quick tour of the must-eat restaurants in town, dining at the aforementioned Prince's Hot Chicken Shack (open this time), Pancake Pantry, and Las Paletas. Prince's delivered on its promise of extra-hot, extra-good fried chicken, Pancake Pantry did indeed make some delicious pancakes (Andrew and I got the lemon apricot pancakes - highly recommended), and Las Paletas offered us gourmet popsicles in flavors ranging from pistachio to rose petal to hibiscus to hot chocolate. Gastronomic success! Big thanks to Johnny for putting us up (and to his housemates for not stepping on us as we lay scattered across the floor) and to Mick, Jon, and Laura for ferrying us around their fair city, the self-proclaimed Athens of the South. Goodbye Music City! Promise you'll write?
Posted by Matt at 8:35 AM