Only in NYC - 24 hours you couldn't have had anywhere else 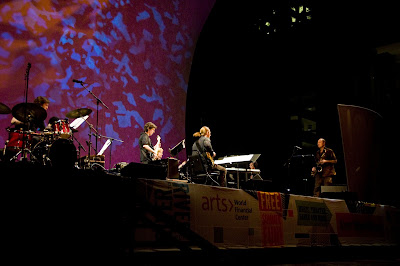 Our bellies full of the delicious grilled offerings of Lauren's Auntie Annie and Uncle Rob, we hopped aboard the Long Island Railroad and chugged our way down to Wall Street, where we met up with UMiami alum Tam Hartman and headed down to a free concert in the World Financial Center. Joined by other distinguished alumni Brian Walsh and Danny Wolf, we caught the last two hours of the annual Bang On A Can marathon, which featured the world premier of several minimalist-esque jazz pieces by the Bang On A Can All-Stars as well as the music of Tortoise. As mesmerizing as the music was, the most impressive aspect of the event was simply the fact that it even existed, a feat referred to as "mind-blowing" on more than one occasion. The setting: an enormous, glass-topped atrium with massive palm trees that looked more hotel than concert venue. The attendees: 1500-2000 people from all walks of life--jamband dancers to investment bankers--all hushed in a pin-drop quiet hall as the sensitive and dynamic bands commanded the energy in the crowd, shifting between soft and pensive to full-blown and head-banging. We somehow managed to walk right up to the stage and were able to enjoy the entire concert from the front row. 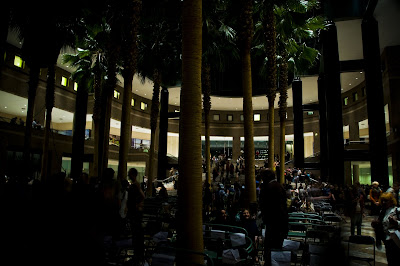 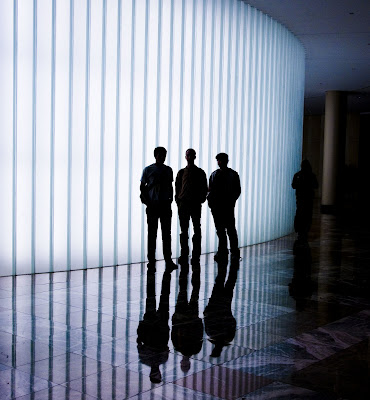 When the music was over, we headed out to Brooklyn to check out Barcade, a bar in Williamsburg featuring great microbrewed beers and about 15-20 classic arcade games that still only cost a quarter per play. Delicious drinks in hand, we were joined by friend and Brooklynite Allison Blum as we pumped quarters into Asteroids, Frogger, Donkey Kong, and Crystal Castle.
The next day started early with a visit to Williamsburg's own Egg, a one-of-a-kind restaurant which features free range eggs, local produce, and personal-sized french press coffee. We highly recommend this to anyone in the area looking for a great meal.
The party continued with a trip to my grandparents house on the Upper West Side, where we were joined by my father and serenaded by Grandma Lily's Shostakovich Preludes for Solo Piano. We definitely appreciated both her unique musical selection and the homemade barley and dill soup she served us! It was great to see them again and have a chance for everyone to meet. 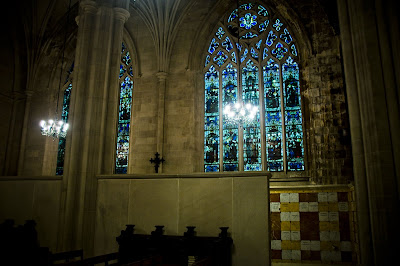 After re-adding Lauren to the crew, the next stop was the supposed largest gothic cathedral in the world, St. John's Cathedral, just a few blocks north of my grandparents. We happened to enter just as the weekly tour of the organ was getting underway, and were lucky enough to hear the $6 million, century old beast in action. After the Q&A session, we were invited to go check out the manuals up close and personal. It was a quite a treat. 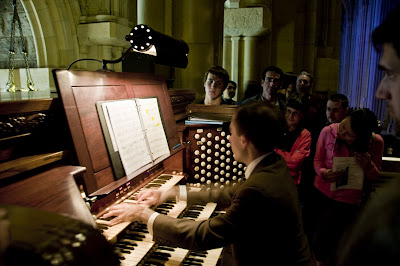 We bid farewell to my dad and headed back out to Long Island, where we were greeted by yet another great meal with Lauren's family, this time also accompanied by Lauren's Uncle John, Aunt Suzanne, and niece Maggie. We chowed down on delicious steaks and potatoes amidst conversation of mayor Bloomberg's security detail and then passed out cold for several hours, content as could be. Tomorrow will be a long day, with the 8 hour drive to Pittsburgh, hour long show, and immediate 3 hour drive to Cleveland. Tour!
Posted by Nick at 8:34 PM