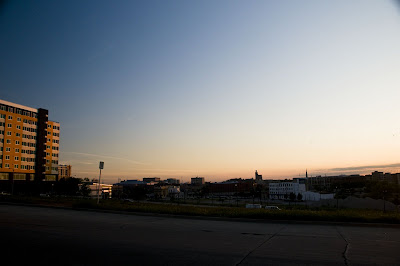 It was a nice short trip from Chicago to Milwaukee and we were greeted by Luke's friends Matt and Bill, who were both awesome and accommodating. The venue, Point's East Pub, has a nice stage with great sound and a very friendly and knowledgeable sound guy. After some lineup mish mashing, we were able to play first in order to let Matt get back to Appleton for his sister's graduation (which was to happen the following morning) before 3am.
The audience was mainly older, due to the fact that the headlining act was a reunion tour of a band from the 80's, Animal Magnets. They seemed to appreciate our sound and had a lot of nice things to say after the show. Also, we sold our 80th CD, meaning that we have now made our money back from the printing costs. Yay!
The night continued after the gig in crowded and exciting Milwaukee bars, featuring future high-fives and goofy outfits. Also, Andrew and I were at one point confused for members of The Jonas Brothers thanks to our jackets(?) There was also a point where we all jumped on the roof of a bus and danced, but that's a story for another post.
The following day, Matt (not Gajewski) took us to see Milwaukee's beautiful and very unexpected beaches. We played frisbee in the sun and sand and wore ourselves out entirely. Luckily, the trip to Madison was just 1.5 hours, where we were greeted with delicious hamburgers and Babcock Hall Ice Cream...but again, that is a story for another post. We could really get used to this "driving less than two hours a day" thing. Unfortunately our next drive is 9 hours...
Posted by Nick at 6:55 PM