A couple things we've found out about being a touring indie rock band:
1.) You can always tell if a show went well when multiple members of the band are constantly and excitedly exclaiming "I f-in' love (enter city name)" all night long. Chicago was definitely one of those cities.
2.) You can always tell you're playing a good venue when your set is sandwiched in between two rounds of crazy all-girl arm wrestling. Reggie's Music Joint was definitely one of those venues. 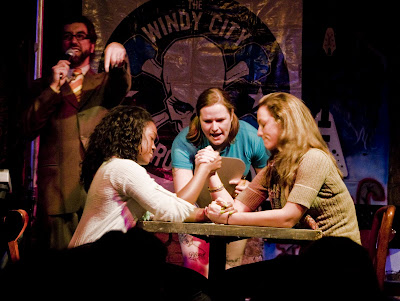 Chicago was just one of those perfect gigs. The sound on stage was great, we got to see some good friends and my big sister Lydia, and we met an awesome Roller Derby Superwoman named Pam-demic who bought us a big round of Templeton Rye Whiskey (an Iowa brand with a delicious recipe unchanged since the prohibition era) and suggested we talk derby to her. Also, the all-girl arm wrestling bouts really riled up the crowd and energized the room for our set.
We loved Chicago so much that we plan on going back this Wednesday after Minneapolis just to take in the city and check out my former Carbondale friends Mike, Kevin, and Colin of Spare Parts as they take on their weekly gig at AliveOne in Lincoln Park. But for now, it is onward to Madison for a quick layover before we hit the Twin Cities. Goodbye for now, Chi-town, we will see you soon.
Posted by Nick at 8:17 AM