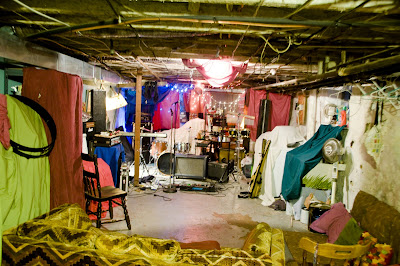 We made it to Philadelphia, City of Brotherly Love, without any major vehicular difficulties - joy of joys! - and drove past the endless West Philly row houses (and two little girls riding ponies on the sidewalk for some reason) to the Iwaa-Bina house, home of fellow U of Miami graduate Bonnie Lander and seven other kind souls. Iwaa apparently originally stood for It's Worth Arguing About (there was apparently a heated debate over what the house should be called), but now stands for Iwaa Was an Acronym (and Bina stands for But It's Not Anymore) [ed. - Luke points out that this is actually a recursive acronym]. We played in the basement, at one point dubbed the Iwaa-genous Zone by the organizer, Emili, and performed predominantly slow jams, extra-quiet, since sometimes you have to rock and roll all night until the audience's ears bleed and their craniums throb and their senses are overtaken by gut-busting metal, and sometimes you have to play at a tastefully reduced volume in a residential basement, and last night was a tastefully reduced volume in a residential basement kind of night. It was refreshing to play to an attentive audience in such an intimate setting - everyone in the band had a lot of fun slow-jamming in the subterranean confines of the Iwaa-genous Zone. Special thanks to Emili for organizing the show and to Bonnie for allowing us to play, and also muchos kudos to Jonathan and Paleo (www.myspace.com/paleo) for performing great, idiosyncratic solo sets. Next stop: the rejuvenating natural springs / welcoming Moellmans of Saratoga Springs, New York!
Posted by Matt at 11:52 PM