Mercury Is Back in Prograde

With "Infinite Dampness Tour 2k9" looking grim in the City Beautiful, things took a turn for the better as Mercury went back into prograde and we played a successful show at Jackrabbit's in Jacksonville. Well, successful if you count playing to the other bands, the sound girl, a fellow U of Miami student, and our drummer's dad's old frat brother as successful. But considering that earlier this morning we owned a tour van whose only means of locomotion required the neutral gear and four band members outside the van, pushing, we were willing to take any form of success we could get.
After the show we walked into old reliable Steak n Shake, drawn by the siren song of the $3.99 menu, and our indie rock (i.e. women's blazers and/or faux fur vests) attire precipitated the following exchange:
Friendly Steak n Shake Employee: Looks like you guys just walked out of a movie!
Andrew: What would have just happened in the movie before we came in?
FSnSE: Well, our restaurant would have just been robbed, and you guys would have just shown up . . . and that guy [ed. - Luke] is definitely the killer.
Then of course there was the required group photo: 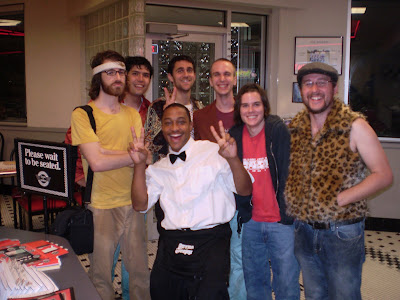