After getting back to Silas' place (another awesome musician who we are staying with in Asheville), Matt tried to pull the van a bit further up the hill and closer to the curb, where the thing stalled, and would not start again (ed. - also, our right rear tire blew out en route to Asheville and had to be swapped out for a spare).  So we got up bright and chirpy and full of overwhelming dread this morning to find that, yes, it still won't go. A few minutes ago Nick and Andrew left with the tow-truck guy to some mechanic who can check it out today. Looks like our show in Richmond ain't gonna happen...and since today is Friday and peeps won't work on the weekend, the Philly house party is also looking highly unlikely. (UPDATE: The van is now fixed [new fuel pump], and we will likely make both the Richmond and Philly shows! Thank you Xpertech Car Care!) So, looking on the bright side, it looks like we are gonna be spending some quality time in Asheville.

So it's not all bad. Asheville seems like a really cool, really chilled city. Last night certainly proved interesting. We had a gig at this place called The Boiler Room with The Summertime Whiskey Band, who play mostly a fusion of Chili Peppers style funk and metal. It was hilariously under attended, the audience consisting of the other band, the sound guy Matt, and our lovely bartender called Sarah. We definitely made our own party out of it though and were moshing violently; later Nick and Andrew had a charming slow dance, but the peak was definitely when the band played their track "Lethal Funk" and we enacted the scenario of becoming zombies and eating Luke's brain on the dance floor.

After packing up the then-functional van, we headed down Broadway down to a hoppin' little joint called the Emerald Lounge. The place was full of dread-headed folks and hip-hoppers and cute hippie waifs who were checking out an ridiculously dope three piece from Nashville called Two Fresh.

Two dudes on laptops plus a mad-tight drummer who was just killing it. Kind of a hip-hop/dubstep vibe. We had a boogie and some guy kept trying to throw down and dance fight people, I don't know....

We had a chat to the guys after their set, which I wish we could have some lots more of! They are also touring, have a really similar van to us, and have also had totally BS issues with it. Anyway, check 'em out!

Fingers crossed on the van...will keep you posted. It certainly makes the fact that we are called van*gloria seem really hilarious.... : | 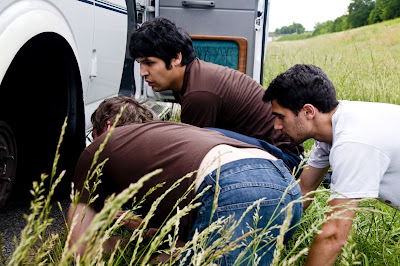 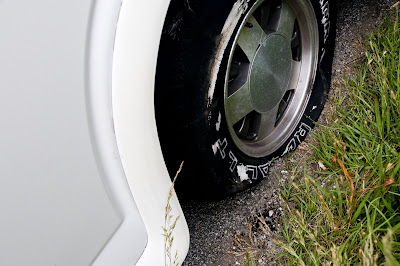 Posted by Benders Blues at 7:37 AM