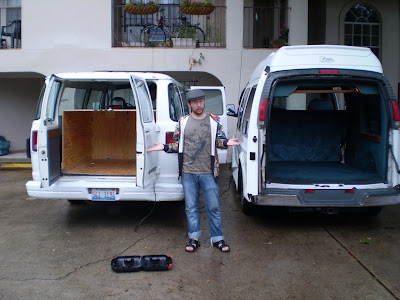 Well, Gloria...she had a good run. No she didn't. She never really ran that well. She was just a white whale. Weeks and weeks of trying to find a decent fan for less than $2000 ended in us getting completely screwed by a complete asshole Jacksonville native named Shawn Frisbie who claimed Gloria was solid. She was not. She has required thousands more dollars in repairs, countless hours of my labor in painting and recarpeting...and yesterday morning she wouldn't start...so we decided that she can't possibly make the tour.
Today was quite a whirlwind. We made it to a car dealer in the next town over by the time they opened at 9am, and after many disappointing vans our sights were set on Estefan, a beautiful 98 Chevy Conversion Van with all the fixin's. After a few hours of waiting while the seats were all switched around (and picking up some sweet thrift store items--see above post) she was ours. Most importantly she starts and does not leak any fuel. Also, she has an alarm, tinted windows, super AC, 8 CD changer, and a TV. I guess we all wish we'd got this from the get-go, but how could we have known we have to spend more to save more. A fine lesson learned. In the pouring rain (2nd day in a row of straight rain) we transfered the contents from one van to the next and by 4:30 we were on the road. We made our way up to Jacksonville and pulled up to Jackrabbits just as the clock struck 7pm--right on time! As I sit here now, only 15 minutes away from Shawn Frisbie's trailer, the address of which I still remember, I dream of all the things I could do to seek revenge--Molotov cocktails, massive gas fires, or even something as simple as taking a dump on his lawn...but I'm tired and it's late...and raining, oh the raining.
Posted by Nick at 8:33 PM